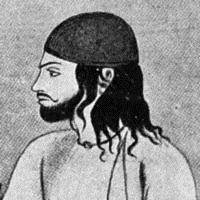 If I had been in nothingness, my heart would not complain

were I not here, there’d be no heart and with no heart no pain

I have to die now, as she bids the messenger explain

you thought of someone else’s pain, else smoke of my lament

would not bring tears to your eyes, however dense it went

had you not bid me rise and leave, I wouldn’t bow elsewhere

if even were my destiny, it would not be I swear

when union, that I yearned for, came, no pleasure I received

I would be glad at my foe’s death, if only she’d not grieved

constriction of this world and throngs of frenzy caused me grief

perchance my rivals stared at her, for else, in no event

would coyness in her eyes appear, or would her neck be bent

there beauty does ever increase, here love does daily grow

the lecher faithless in intent, does bathe too in her glow

the Maker too would not accept her dainty finger bruised

thus a response I didn’t expect, lest by a quill contused

attracted by her lover’s heart, she roams without a care

for else her feet so frail and soft, nary a step would dare

Where else could union be obtained except in reverie

in dreams desires I would sate, did she not coyly flee

Muslim Momin turned in fear , not on the priest’s advice

parting’s pain I could not bear, of hell didn’t care a trice

Wo Mujhse Kahte Hain Muskura Do

Scroll back to top